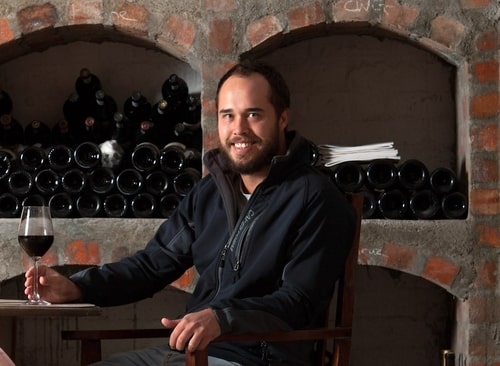 A visit to the Noble Vice Wine & Culinary Festival in Cape Town provided a terrific look at a range of estate and terroir-focused producers working in South Africa today. The show floor saw established players such as Bosman Family Vineyards, Kaapzicht and Reyneke Organic, pouring alongside new and emerging producers. It was a really great tasting and provided a welcome introduction to the current state of affairs in South African winemaking. These four producers are ones to watch in my books.

Boschkloof | Kottabos
Reenen Borman (pictured above) assumed control of the family cellars at Boschkloof Wines in 2012. Kottabos exists as a second label of the Stellenbosch-based winery, allowing Borman a chance to play with grape varieties outside of the family estate. The Boschkloof reds on display, the 2017 Syrah and 2017 Epilogue, were showstoppers boasting incredible perfume and polished character. These wines have a sterling reputation with connoisseurs and collectors. The more affordable and unassuming Kottabos 2018 Grenache-Syrah, however, was the revelation. Bright, fresh and fleshy, this is a vibrant red with real verve and appeal. Wonderful stuff for everyday drinking.

Cold Mountain Vineyards | Brunia Wines
Brunia is family-owned and based on Cold Mountain Vineyards in Sondagskloof, part of the Overberg region on the south coast. Made by Wade Sander, who works as an assistant winemaker with Mullineux & Leeu Family Wines in Swartland and Franschoek, the brand introduced a 2018 Semillon and 2017 Pinot Noir at the Noble Vice tasting. The Semillon is bright, fresh and deliciously drinkable, while the Pinot Noir showed striking purity and definition. Less than 1,000 bottles were produced of the Pinot, which stood out as one of the most memorable wines of the tasting.

Lelie Van Saron | Natasha Williams Signature Wines
Based in the Hemel en Aarde, winemaker Natasha Williams launched a new venture in 2017 with Lelie Van Saron. (Saron references Williams’ hometown in the western Cape.) Moonlighting from her position with Bosman Family Vineyards, which she joined shortly after completing her winemaking degree at Stellenbosch University, Williams has made an impressive debut with elegant expressions of Chardonnay and Syrah, with fruit sourced from the Upper Hemel en Aarde Valley in Hermanus. These are small production wines with tremendous promise. The Chardonnay is particularly attractive with lovely fruit and focus. The lingering, refreshing finish adds greatly to the appeal.

Scions of Sinai
Winemaker Bernhard Bredell launched Scions of Sinai in 2016. He explains his small production cellar is located in a “less popular area of Stellenbosch.” Grapes are sourced from vineyards in the Lower Helderberg region around a granite hill colloquially known as Sinai Hill, where seven generations of his family have lived. Bredell presented a fun range of wines, including the first look at the 2019 vintages of his engaging skin-fermented blend of Grenache Blanc and Chenin Blanc, Senor Tallos, and fresh and juicy Cinsault/Pinotage blend, Nomadis. The latter inspired by Bredell’s work in France, particularly Beaujolais. He believes the small addition of Pinotage adds depth and complexity to the fruity character of the Cinsault, which improves its drinkability. It’s a really successful and tasty blend.

Written by Christopher Waters on Monday, 16 September 2019. Posted in The Producers