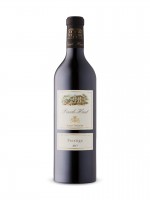 Established in the eastern Languedoc in 1981 by French businessman Gérard Bru, Puech-Haut has benefited from sizeable investments and high-powered consultants, such as Michel Rolland and Philippe Cambie. The ownership has recently grown to include co-owners Marc and Olga Escassut, enologists who are native to the south of France. The newly released 2017 Prestige is a flavourful blend of grenache and syrah that’s packed with juicy, concentrated fruit and boasts a smooth texture with a satisfying finish. It’s drinking nicely now but can hold three to five years. (91/100)