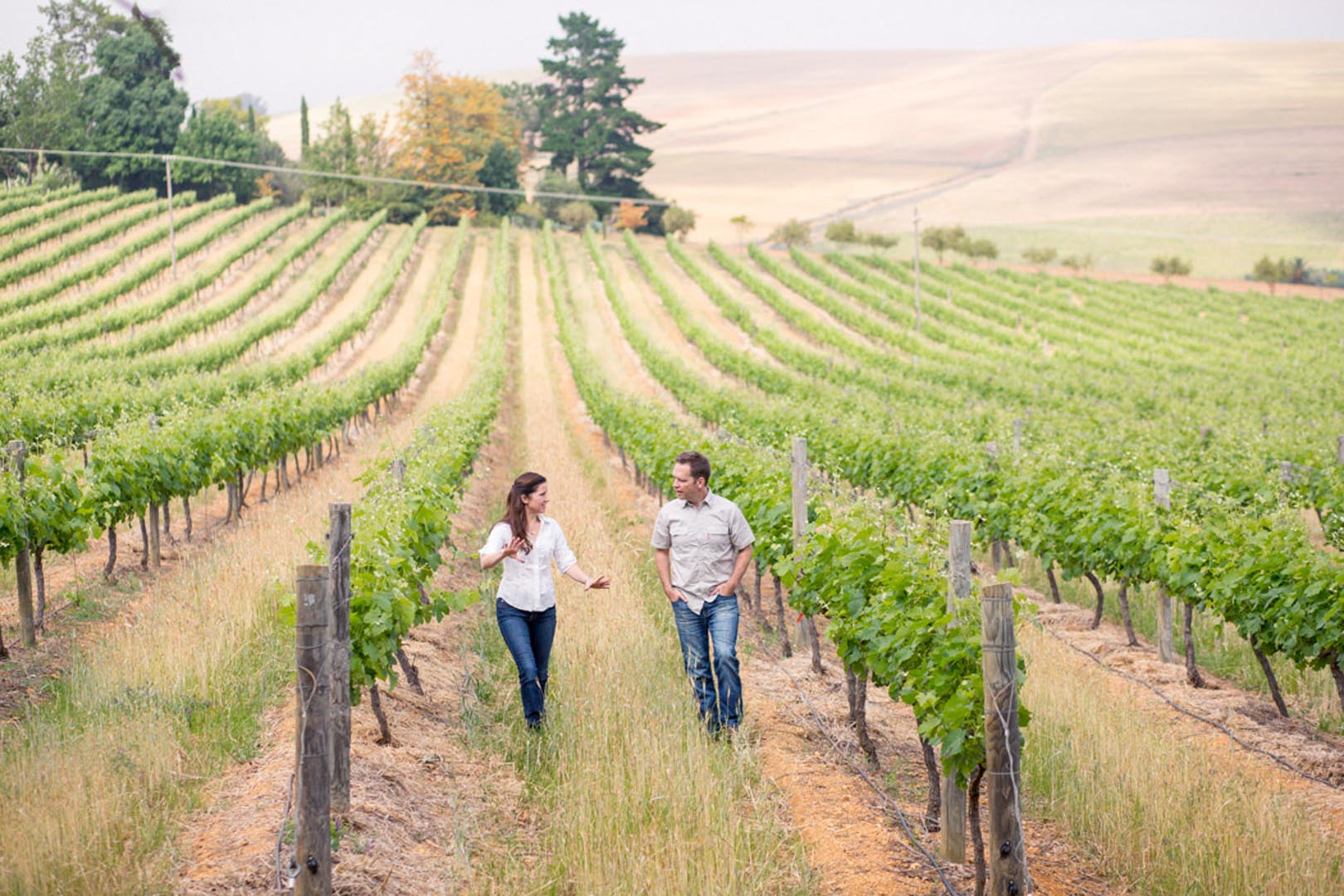 Chris and Andrea Mullineux have made impressive strides since Opening Their winery in 2007. Working with friends Adi Badenhorst and Eban Sadie, they formed the Swartland Independent Producers to raise the profile of the under-the-radar region. A slew of international awards and accolades followed as the couple continues to produce some of South Africa’s most distinctive wines. Mullineux’s stylish white blend, delicious range of straw wines and a portfolio of Syrahs that truly speak about a sense of place. Partnering with multi-millionaire Indian businessman Analjit Singh sees the couple start a new chapter. As Chris explains: “We’ve been able to consolidate and secure what we are doing in Swartland and start something new, with a different focus in Franschhoek.”

It’s interesting to hear people still call you and others in the Swartland Independent Producers newcomers. You can’t be the new kids forever. When we first moved to Swartland there were probably 12 producers and that quickly grew. Now, it’s 34 or so and it’s levelled off. Every region is going to have its five minutes or 10 minutes of fame, but to be successful in the long term, they have to be built on something substantial and real.

What’s the motivation behind the Swartland Independent Producers? A lot of people think we started a marketing body. Really, it’s a producer thing. I think if you speak to Eban or Adi, what we are trying to do is work together. The wines must speak of the Swartland and our sense of place. We get together every second month and taste each other’s wines and talk about the previous vintage, about problems we encountered and things that we can learn. I think if we can work together and share ideas, we’ll have a healthy, strong region.

Do you consider yourselves natural winemakers? We set up our rules to promote the Swartland terroir. Don’t add yeast. Don’t acidify. Use moderate amounts of sulfur. Don’t use new wood. All ways to make wine that wasn’t manipulated. That didn’t hide our sense of place. You can interpret them in a different way, that it’s about making natural wine. But if you take it to extremes, it becomes about not doing anything just for the sake of not doing anything. That’s where we have to be careful. We can easily be put into the natural camp and that might be a fashion and then five, 10 years down the line, we discover we’re in the wrong boat. We are constantly reminding ourselves it’s about making wines that are true to the Swartland.

What’s the vision for Mullineux & Leeu Family Wines? Our partner Analjit Singh has properties in Franschhoek and he’s helped us buy a property in Swartland where we are planting vineyards. We are expanding to create a new label separate from the Swartland-based Mullineux and Kloof Street portfolios. It won’t be a Franschhoek wine of origin. We’re following a Boekenhoutskloof model where we'll use some fruit from the valley and purchased fruit from exciting vineyards all around the Cape.

You’ve said the Franschhoek wines will be different. What’s the focus? White blends are still an exciting category, but we think red blends can rival them. If you’re lucky enough to taste Cabernet and Cinsault blends from the 1950s and 1960s today, like those made at Alto, Lanzerac or Zonnenblum, they're still incredible. Mind-blowing. The younger generation is looking back and seeing that the potential for Cinsault is incredible. For young wines, Cinsault brings great vibrancy and perfume. On its own it looks delicate, light and insubstantial, but it’s actually a wine that can age really well. Blending it with Cabernet or Syrah, it’s fantastic. And no one else does it, so it’s uniquely South African. It’s like Andrea always says, it’s taking that old blend and deconstructing it. We’re working with Cabernet Sauvignon, Cinsault, Syrah, Cabernet Franc and looking to do it in a more modern style.