Blending tradition and innovation to keep the fizz flowing 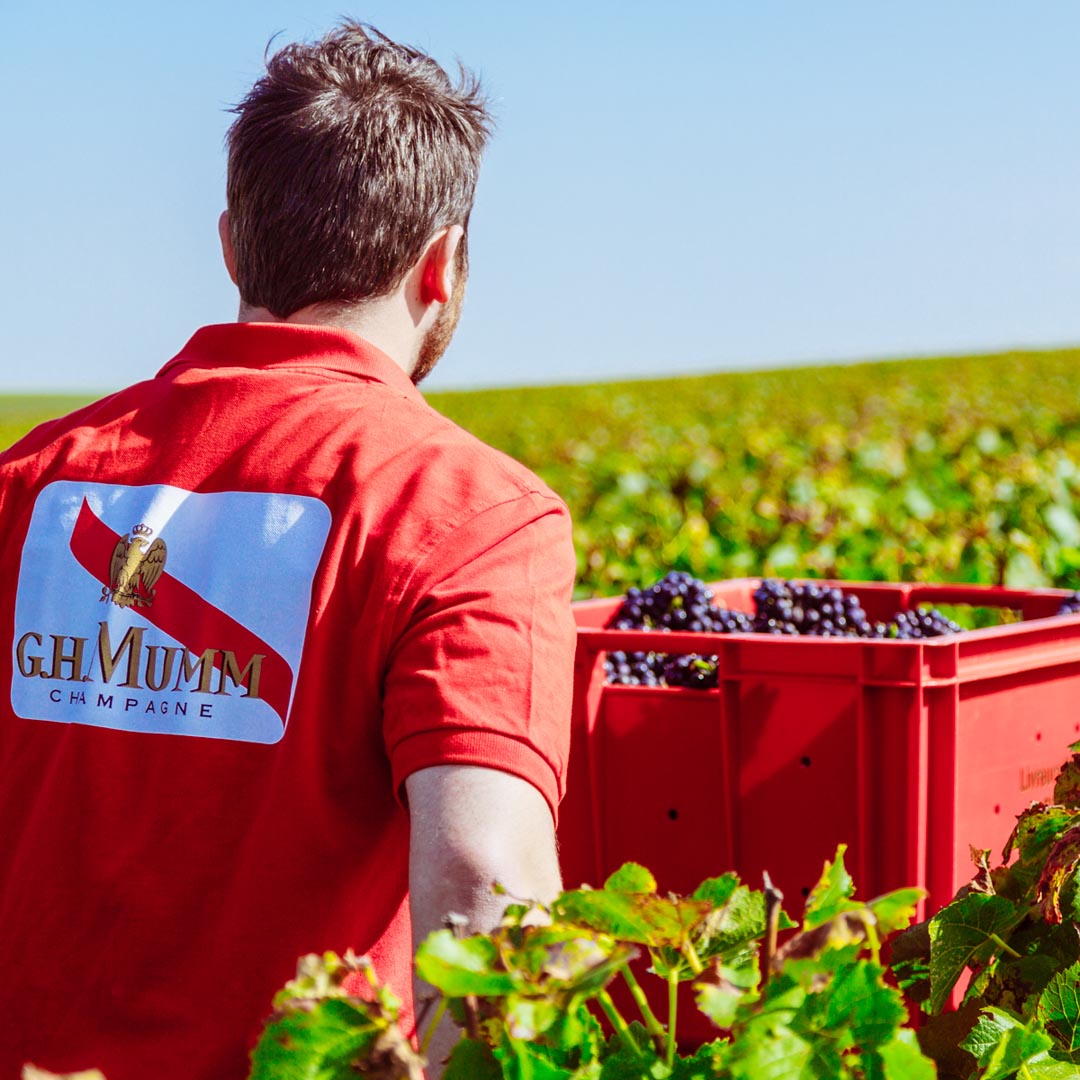 As head winemaker for Champagne house G.H. Mumm, Didier Mariotti has a different relationship with a beverage many turn to only when there’s a major milestone to celebrate. Since working as a student intern at Möet & Chandon in 1995, the native of Montreux, Switzerland has made a career producing premium sparkling wine in the Champagne region.

As cellar master of Mumm since 2006, Mariotti produces eight to nine million bottles of Mumm Cordon Rouge each year as well as smaller batches of rosé, vintage sparklings and other luxury cuvées. Mumm is the third largest Champagne producer behind Moët & Chandon and Veuve Clicquot. Not surprisingly Mariotti is on a mission to get people to drink more Champagne, and not just on special occasions.

“Champagne is a cause for celebration, but it's also a wine,” Mariotti explains.

"You can enjoy it with food, in a restaurant or at home. Champagne is so successful because you can drink it 24 hours a day.

“You can drink it for breakfast. You can have it as an aperitif or with a meal. You can drink Champagne all night in a bar or at the club.”

Mariotti isn’t alone. Vines spoke with three cellar masters for prestigious Champagne houses to find out how they are blending tradition and innovation to inspire more — or at very least, continued — interest in their product. Mumm’s Mariotti, Champagne Piper-Heidsieck’s Régis Camus and Moët & Chandon’s Benoît Gouez were all interviewed during marketing appearances in Toronto at different times in recent months.

G.H. Mumm enjoys global success, with its largest export markets located in Australia and Japan. Canadian consumption is increasing as provincial liquor boards have started to embrace the brand.

Mariotti says his job starts with creating the blend for Cordon Rouge, a brand that celebrates its 140th anniversary this year. He works with fruit from Mumm's 218 hectares of vineyards as well as contracted growers to produce wines in the house style, which calls for a majority of Pinot Noir, representing 45 percent of the blend for Cordon Rouge and more than 50 percent of the rosé cuvée.

The Cordon Rouge is all about fresh fruits, Mariotta explains.

"You can taste the juiciness of the fruit flavours when you drink the Cordon Rouge, whereas for me the rosé is a wine that can refresh your palate. I want to make it crisp and easy to drink."

The winemaker also has some thoughts on how to best enjoy his Champagnes, suggesting that the traditional flute glass isn't your only option for serving sparkling wine.

“Champagne is a wine,” Mariotti says again. “The temperature and the glass you use have an effect.

“For Champagne, everyone uses a flute, but that makes the bubbles the most important attribute. It's very interesting to pour the same wine into different glasses — flutes and a larger wine glasses — so you'll see differences in terms of flavours and in terms of textures.”

Certainly there’s a decorative element to flutes and something to be desired when it comes to their performance-enhancing effect on the effervescence, but wine glasses aid the enjoyment of the wine’s character and complexity.

“It's not really a question of which is the best glass,” says Mariotti, “but which you prefer.”

Chef du cave at Piper-Heidsieck since 1994, Régis Camus has helped revolutionize production methods and philosophy at the historic cellar in Reims. The Piper-Heidsieck name dates back to 1839 and the house is famous for its range of Champagnes, all produced using a non-malolactic, low-dosage method.

During his tenure, Camus has increased the share of vineyards from the Côte de Bars in the south of the region that compose the Brut Non-Vintage, focusing on revealing a fruitier expression of Pinot Noir. In a bid to increase its richness, complexity and harmony, he extended the maturation on lees to a minimum of 24 months (appellation laws call for a minimum of 15 months) and mandated keeping the wine in the cellar at least three months after disgorging.

Camus also notably spearheaded construction of a larger winery to enable the team to vinify grapes from each of the 100 villages separately and build a library of reserve wines.

He says the Brut Non-Vintage is the measuring stick for the quality at Piper-Heidsieck, but maintaining the house style, a consistent expression year after year for the multi-vintage blend has become a challenge given the erratic nature of recent growing seasons. “It’s the image of the house, the wine that represents the style of Piper,” he explains, speaking through a translator. “Years follow each other, but don’t resemble each other. In 2011, the harvest was in August. In 2012, it was in September and 2013, in October — the first time in 22 years, that grapes were harvested in October.”

Camus compares creating the base wine as doing a puzzle. The team needs to taste all of the components, from the Chardonnay, Pinot Noir and Meunier fermented from the current vintage as well as the reserve wines to try and re-create the same style as the previous year.

The typical blend is 55 percent Pinot Noir, 15 percent Chardonnay and 30 percent Meunier. Depending on the year, the reserve wine — traditionally Chardonnay and Pinot Noir that’s four to six years of age — represents eight to 10 percent of the blend.

Camus explains that the light amber colour and overall structure of the finished Champagne comes from the large percentage of Pinot Noir in the blend. “It’s very fresh in the mouth, with citrus, grapefruit and apple, and a long length that’s enhanced by the addition of the reserve wines.”

Drawing parallels to the fashion world, Camus characterized the Brut Non-Vintage as the ready-to-wear collection whereas the newly released 2006 Brut is the bespoke, haute couture line. “I like to give names that capture the character of the vintage releases,” he says. “1998 was subtle, 1999 was extravagant… 2004 was the marathon runner. It’s very energetic and racy. You will be able to keep it for many years.”

The 2006 vintage is more round and diplomatic by Camus’ estimation. It’s a wine marked by the contrast of the growing season, with a rainy spring and unsettled summer, and shaped by the larger than usual percentage of Chardonnay, which is 51 percent of the blend. Chardonnay responded better to the season, yielding a more aromatic and mineral expression. (Meunier doesn’t play a role in the blend for the vintage wines at Piper-Heidsieck.)

“If we kept the tradition of having a majority of Pinot Noir, the wine would have been too rich and heavy, which isn’t the signature style of Piper-Heidsieck,” Camus explains. “I am very proud of this vintage. It wasn’t easy, but the result is very nice.”

The concept was to blend oaked and unoaked still wines with finished sparkling wines to create a rich and complex base as the foundation for a prestige cuvée. The new wine would crown the quality pyramid that rises from Brut Impérial to Grand Vintage.

Gouez suggests it’s a daring project that only Moët & Chandon could conceive, given that the house manages the largest cellar of vintage Champagne. “The collection dates back to 1830,” he says, adding that the maze of underground cellars span some 28 kilometres in Epernay.

“Twenty years ago, my predecessors started to think of a new wine for Moët & Chandon. Different things have been tried, different blends have been bottled, but nothing was satisfactory,” Gouez explains.

Momentum for MC III increased when Moët blended 11 of last century’s top vintages to create 323 magnums of a special millennium bottlings, Espirit du Siecle. The team learned how to successfully blend wines that are already sparkling and put that cuvée through secondary fermentation to produce more bubbles.

“We usually only open bottles when we don’t like what’s inside them. We open them, pour them into a tank and re-ferment the wine, but in the case of Espirit du Siecle we did that in a positive way,” says Gouez. “And we realized it gave the wine a very special character.”

Ultimately the idea for MC III is to use a base of vintage blends that have been aged in three different ways, in stainless steel, oak and glass bottles. The resulting wine would then reveal complexity through primary, secondary and tertiary notes that would be unlike any other wine produced in Champagne.

Gouez says it took 15 years from that initial inspiration to the release of MC III — the official name is MC III Brut 001.14. “The first cuvée that we’re releasing is actually the third blend, based on the vintage 2003, a very ripe vintage. The two first trials failed because the wines lost their fruitiness — the wines were too light to support wines that were aged in oak and had such a strong character. Everything Moët does is based upon fruitiness.”

It’s clear, he added, they won’t make MC III every vintage. “We need a wine that will be strong enough, rich enough, fruity enough to be complemented by the other wines.”

But with climate change yielding riper grapes in general across the Champagne region, there’s better opportunity to experience the warmer conditions needed. However, with a price tag of more than $600 per bottle, MC III isn’t the sort of Champagne made to be mass-produced. Only a few thousand bottles are being released globally.