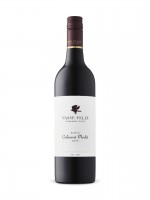 Visions of Bordeaux danced through the heads of the founding fathers of the Margaret River wine industry. Having looked at all of the available data about growing conditions, they drew a parallel to the spiritual home of Cabernet Sauvignon and Merlot and planted their vineyards accordingly. Fifty years later, these wide-eyed assumptions have been proven correct (although Chardonnay is a close rival to Cabernet as the region's brightest star). Anyone looking for an affordable introduction to the glory of Margaret River Cabernet-based wines need look no farther. Sourced from vineyards in the northern half of Margaret River, the Filius Cabernet Merlot is decidedly medium bodied and nicely balanced — it's pretty much textbook Cabernet Merlot, with structure coming from the former and plush texture and hedonic fruit delivered by the latter. The touch of Malbec in the blend just might be the tail wagging the dog here, bringing more concentrated fruit to the mix of savoury and black olive notes. A blend of 51 percent Cabernet Sauvignon, 43 percent Merlot, five percent Malbec and one percent Petit Verdot makes the 2015 Filius a rich and rewarding red wine that's ready to drink now and over the next six to eight years. Even more impressive given this represents the entry level. Great Value.